How to Leverage the Social Media Power Shift for Good

Social media shifts the power from the few to the masses. Here’s how it works and how you can benefit from the shift:

Before Social Media, Power was Held by the Few 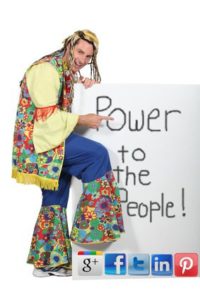 Before social media, the power was in the hands of a few. The wealthy, executives, publicists and formal (traditional) media controlled the message. If the CEO of a large corporation did not like a message, they could stop it from getting out. Publishers decided what message would reach the public. Traditional media of all forms (TV, News, Radio), could spin the final message in the light of their own perceptions.

In short, the masses did not control the message. Whatever the few believed was the right message or believed would get the greatest return on investment, got pushed to the masses.

With Social Media, Power is Now in the Hands of the Masses

Today, when the few try to control the message and the masses disagree, there is fast, influential and measurable feedback:

Influential: Feedback to messages gain momentum in social media. The more people react to it, the more people see it and respond to it. As a result, the spiral – positive or negative – is amplified.

Measurable: Social media technology enables the simple tracking and quantification of the feedback. Counting the number of individuals agreeing or disagreeing and the overall sentiment – positive or negative – is easy and verifiable.

So the power shifts from the few to the masses because the masses now control the message. The message is controlled with speed, influence and measurement.

Now you can take advantage of this opportunity. All you need do to maximize the benefit of this power shift is serve the masses and be transparent.

To serve the masses, have their best interest at heart. This does not mean merely appeasing the masses. That would not be effective leadership. Instead, leadership means making tough decisions and sometimes doing what the people need, not necessarily what they want.

Social media power is not a popularity contest. It is a validation contest. In other words, if you have people’s best interest at heart, it is hard to argue against your position. You may not be popular, but the response to your message cannot deny the objective.

To be transparent, you should be authentic and vulnerable. This means revealing your contemplation. Leaders who claim to always be sure of themselves come across as egotistical, out of touch with reality and unwilling to listen to the masses.

In contrast, a leader who seems human, is authentic in contemplating their decisions and transparent about “the why” behind their final decision is appreciated by the masses.

Is it always this simple? No. Will everyone agree if you are serving and transparent? Of course not. Will it help you build support in a world that has shifted power from the few to the masses? Definitely.

Question: How do you think leaders can leverage the power of social media for good? Please give your feedback here.