I was very fortunate to be offered a coveted pass to SAP’s Sapphire conference last week. This is one of the larger conferences in the IT industry and specifically targets senior managers and executives requiring large-scale applications. As a result, although I was there for my employer and focused my time on their solutions, I also observed some of the leadership styles by so many information technology executives attending this conference. The attendance was down – a sign of the economic times, but there remained a broad range of leadership styles represented by Speakers, Vendors and Bloggers. Below are observations on the leadership styles these individuals presented at the conference*. 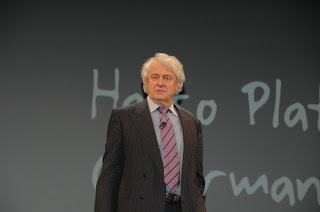 Speakers & SAP Executives (Positive)
While commitments back at the office prevented me from catching all of the keynote speakers and SAP executives presenting, I was able to get to most of the top keynotes.

Opening Keynote: Abbe Mulders & Steven Levitt (Neutral)
Major themes for this conference included clarity, transparency, Sustainability and, of course, advances in technology. A promising start for SAP Executive leadership and speaker expectations. The conference kicked off with Ms. Abbe Mulders, ASUG Vice Chairperson, Dow Corning Corporation CIO and Mr. Steven Levitt author of FREAKONOMICS. Abbe provided a good welcome and spoke of the power of ASUG, (the American SAP User Group). Again, a plus for recognizing the power of users, collaboration and support. Levitt provided a very revealing life history that included the fact that his father was not stellar in medical studies and practice, but chose the very uncommon field of intestinal gas. It worked for him – he became recognized as an expert in his field, even including a GQ article dubbing him “The King of Farts”. Following in his footsteps, in a manner, the younger Levitt found himself terrible at Math – a bad sign for economists. However, he focused on very unique circumstances in which very few “self-respecting” economists practiced. It worked for him as well. This emphasis on “anything’s possible” when you focus on the right area, was also a positive for leadership.

The only real negative from the opening Keynote was Levitt’s surprising factor that drunk walkers are 8 times more likely to die than drunk drivers. Shocking as this may be, he avoided addressing the risks to others in equivalent detail. One would think drunk drivers are far more likely to kill others than drunk walkers. A setback for transparency by speakers at the conference.

Léo Apotheker (Positive)
Well rehearsed and spoken, Apotheker presented the importance of clarity and transparency SAP provides its clients to their customers. Also surprisingly strong was this Co-CEO of SAP’s message on sustainability. Apotheker claimed the SAP sustainability roadmap is the first in their industry and set a goal for the organization to make every business process sustainable. Strong points for good leadership. Apotheker’s style tended toward a traditional corporate leader – befitting his role.

Ian Kimbell (Positive)
Mr. Kimbell, SAP’s self-proclaimed “Demo Boy” was first introduced at the conference while demonstrating solutions for Mr. Apotheker’s keynote. Probably the most polished of all presenters, Kimbell seemed more comfortable on stage than most people are simply in their own skin. Kimbell’s demonstrations, humor and general ease on stage was so good, in fact, that some people have questioned the reality behind his demonstrations and the effort required to achieve similar goals – was the demonstration too simplified? Still, Kimbell is to be applauded, especially for his later performance, balancing the ever-dynamic Hasso Plattner. Kimbell presented strong leadership through thorough preparation and charisma. A traditional leadership style, perhaps leaning a bit toward the hero-worship model, but positive nonetheless.

Hasso Plattner (Positive)
Co-Founder of SAP, he’s been called the company’s “Rock Star”. In a conference that touted transparency, there were none more transparent than Hasso Plattner. His presentation was very technical for the crowd, but still remarkably clear given his to-and-fro speaking points. With comments like, “SAP may not want to tell you this” or speaking to examples that were still in proof-of-concept phase, Plattner suggested the most down-to-earth mentality of those on stage that day. If you wanted the reality of a situation, you knew Plattner was your person. Whether he could be considered a servant-leader would take much more research, but Plattner’s ability to operate at a remarkably senior level while balancing in-depth technical details was very promising. One thing’s certain, he did not over-rehearse his presentation.

Vendors (Negative)
Vendors with positive leadership were too difficult to identify from brief interactions on the conference floor. Poor leadership, on the other hand, was all too easy to spot. A wide variety of vendors were represented. From behemoths like IBM and Accenture, to companies most have never heard of. One vendor surprised me by asking if he could scan my badge without even speaking to me (a practice which would only add my name and contact information to his undoubtedly growing spammer’s list). Also standing out on the floor were the obvious ploys to attract attention through any means possible. I remained disappointed by the number of “Booth Beauties” (other terms are more common). I still find it hard to believe that companies with quality products should have any need for these tactics and therefore, made it a point to avoid these stands. Milder marketing ploys, were also prevalent, such as the expensive sport cars, power equipment and sizable freebies. While there were undoubtedly plenty of well-led organizations on the floor, unfortunately, the negative still stood out. This resulted in a set-back for overall conference leadership impressions. (Note: I am pleased to say that the vendors I work with were all professionally represented at the conference).

Bloggers (Positive)
Contributing to the discussions and education was a great group of bloggers. Twitter was a popular means of sharing thoughts and feedbcak on the presenters, while other bloggers shared their proposed articles to come, following the conference. Watching these groundswells in action at any conference is always exciting. Within minutes of a presenter’s notable commitment, the quote and feedback on that quote, was already online for the world to see and being discussed. Yes, social technology has truly brought the power to the people. Throughout the conference, though disagreements arose, it remained constructive on Twitter and blogs – another positive for the good guys and strong leadership from the Blogging community.

Now the conference is over, we’ve returned to offices piled full with issues to be addressed and fires to put out, and what have we learned? Besides the excellent lessons on SAP technology, strategy and opportunities, what have attendees experienced from a leadership perspective? They saw a positive side to SAP’s executives, a negative side from many vendors, and a positive leadership example from the blogging community. Net result? Kudos to SAP for not only presenting their technologies, strategy and people in a positive light, but for also a providing a net-positive leadership experience.

* Observations are from the conference only, I did not take into account their character or broader leadership methodologies.