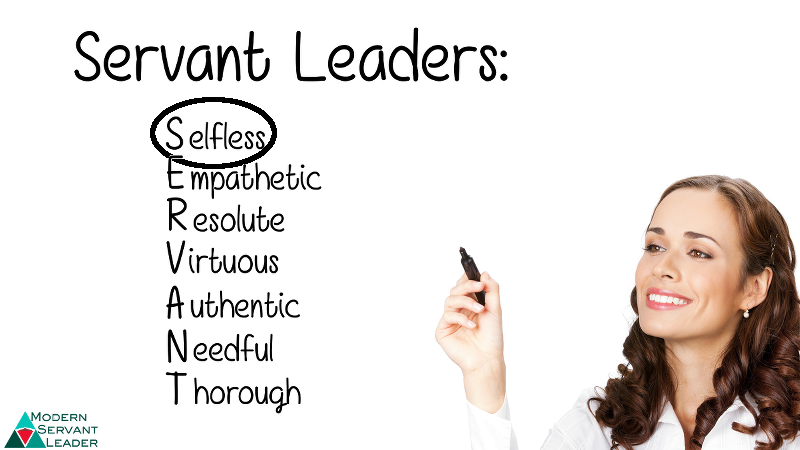 The first principle in the SERVANT-Leadership™ acronym is Selfless. If you’re not serving others, you’re not leading. This captures the selfless nature of leadership in a simple statement. Selflessness is about putting the needs of others before yourself. Specifically, we speak here of putting the needs of those you serve, first.

For example, a servant leader assesses each decision by the impact it will have on the organization and it’s stakeholders. In contrast, the non-serving leader may first worry about how a decision will make them look or impact their reputation.

It’s too easy in organizational leadership to be selfish without being obvious. For example, an executive decides to invest in a project that makes his team look great rather one lead by a peer with stronger benefits. Although the peer’s project may be better for the organization overall, the selfish leader prioritizes their own project to make themselves look better than the peer.

What Selfless is Not

This quote holds true for Selfless leaders as well. Selfless is not a poor self-perception. To the contrary, being selfless requires a great deal of confidence. Being selfless does not mean running yourself ragged for a cause, either. Leaders must be healthy enough to deliver their service, as should their teams.

Selflessness does not mean doing everything you are asked.

Other servant leadership models defined many selfless attributes as important to servant leaders. These include the following from Spears and others1, Frick & Sipe2 as well as Russell & Stone3 (2002).

There are many examples of  selflessness in servant leaders, here are a couple:

Nelson Mandela: After being imprisoned for 27 years, related to his anti-apartheid work in South Africa, Mandela was eventually released. He could have easily sought vengeance against his antagonists and opposition. Instead he pursued a route of reconciliation while simultaneously driving the abolition of apartheid. He was elected South Africa’s first  black president in 1994.

Arthur DeMoulas: CEO of the 71 store New England grocery chain, Market Basket, Arthur DeMoulas is known for humility and service to employees and their families. Through his work, the privately-owned company went above and beyond their competitors with regards to salaries and employee benefits. In 2014, an attempt by rivals to oust the CEO failed terribly, when employees and customers boycotted the store for weeks, until they returned the servant leader to his post.

Question: What do you think is the most important attribute of a selfless servant leader?