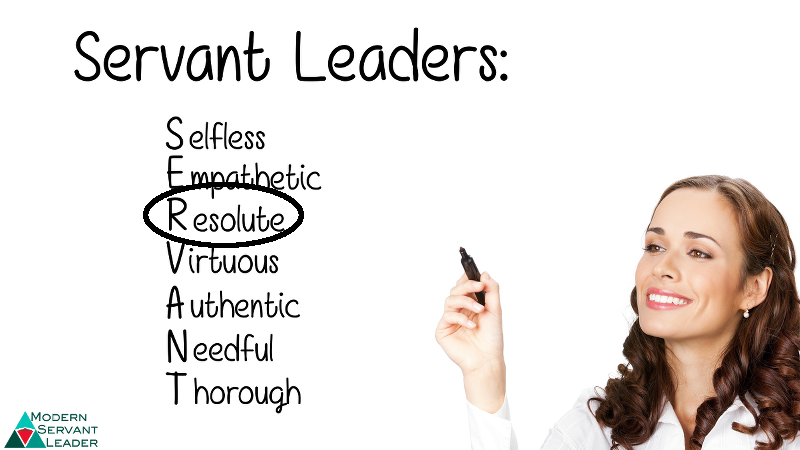 In modern society, where the popular view of leadership is command-and-control, the servant leader faces many detractors. Therefore, the resolve of a leader must be strong to persist in practicing authentic leadership, when the pressures of many stakeholders may be to the contrary.

The resolve of a leader is also vital to achieving results. Often, servant leaders are required to turn around failures of command-and-control predecessors. Whether the situation is that dire or not, the servant leader, in their selflessness and commitment to serving all stakeholders, has great resolve. If the leaders lacks resolve, they will fall into the popular trend of only serving a subset of stakeholders or settling for good, rather than great results.

There is no chance, no destiny, no fate, that can circumvent or hinder or control the firm resolve of a determined soul.” -Ella Wheeler Wilcox

Resolve is required to achieve anything great in most fields today. After all, if it were easy, everybody would do it. However, in leadership, there are unique challenges to one’s resolve. For example, the resolute leader must frequently face opposition, moments of weakness and other barriers to the objective. As a result, resolute leadership often reveals itself in the repetition of a consistent message across many mediums. Today, a leader must champion the vision and mission in public speeches, video, email and other digital media channels. Depending upon the size of the organization, the same message will need to be delivered many times. As one leadership coach puts it, “If you’re not tired of repeating the message, you haven’t said it enough.”

Another example of the resolve of a leader is persistent follow through. One executive, committed to exiting a line of fast food restaurants they owned, told his team they had 12 months to be out of that business. Two months later, he overheard one of the team members saying they were concerned about the timeline – stating they had a year to exit the business. The executive interrupted the conversation saying, “I said we had a year, two months ago. Now, we have 10 months to go.” The team kicked their efforts into high gear the next morning.

What Resolute is Not

Resolve is not ruthlessness. A leader with great resolve does not blindly lead. Too often, leaders with resolve but lacking in other SERVANT-Leadership™ principles, march toward their vision without concern for others. A leader with resolve that fails to serve all stakeholders fails to succeed in leading the organization. For example, if the leader drives hard toward an objective by routinely overworking staff, the leader may seem to have great resolve, but that method is unsustainable. As a result, the resolve of the leader cannot be maintained.

Remember, a key attribute of great SERVANT-Leadership™ includes listening. Resolve is not an excuse to stop listening. Your stakeholders have valuable insight and often can identify critical risks or issues long before you see them. Therefore, servant leaders must continue to listen and be open to input, feed forward and even push back.

Previous servant leadership models defined several resolute attributes as important to servant leaders. These include the following from Spears and others1, Frick & Sipe2 as well as Russell & Stone (2002)3.

Sire Ernest Shackleton: In the early 20th century, Shackleton was among the leading antarctic explorers. He’s largely remembered for the journey of the Endurance, which sought to cross Antarctica through the pole. However, the ship became trapped in ice, crushed and sank. Yet Shackleton led his team to safety, over 497 days. The journey included remarkable struggles through open, icy water, uninhabited land and icebergs. His story and that of his life-saving commitment to his men, is now a celebrated story of leadership resolve.

Alan Mulally: Alan Mulally, as the CEO of Ford Motor Company, did what no other executive of a major US Auto Manufacturer thought possible – he turned around a dying business and fixed the company’s culture while negotiating substantially new auto worker union agreements. He did all this without borrowing from the US taxpayers. This accomplishment required incredible resolve. For instance, he had to persistently resist the suggestions that restructuring the union agreements was not possible, or that Ford should take the money offered by the Federal government. The business results speak to his resolve: from losing billions of dollars to a $7.2 Billion profit and paying their union workers a record $8,800 each in profit sharing.

Question: Which attribute of leadership resolve is most important to you?