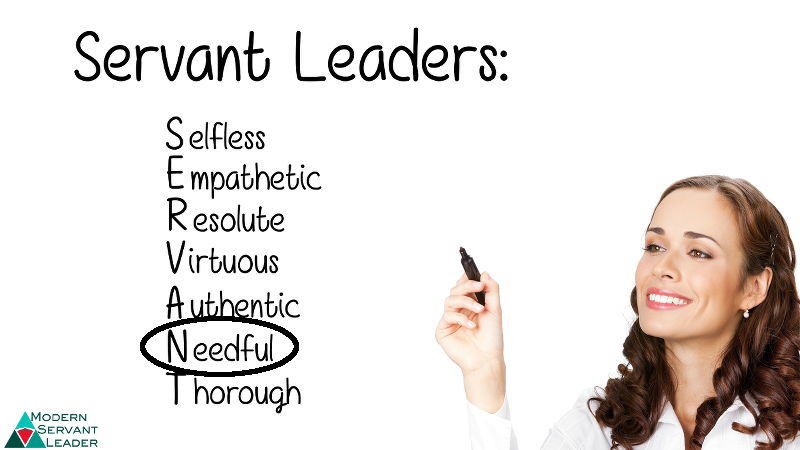 We’re near the end of our series on the definition of Servant Leadership through the acronym SERVANT™. The second-to-last principle is Needful. The servant leader is needful by being open to new ideas from anywhere and remains human, by reflecting their vulnerability.

Operating environments change rapidly. New competitors arise, financial crises occur, political unrest and wars break out, regulations change and funding falls through. The only constant is change. Therefore, any leader must be open to new ideas from anywhere. This is not a new concept. Sam Walton, founder of Walmart, who held SERVANT-leadership™ principles (though many believe the company no longer reflects the values of it’s founder), understood this concept:

The key to success is to get out into the store and listen to what the associates have to say. -Sam Walton

To be needful, a leader should recognize that executives who have not been on the front lines of their organization for years, cannot have all the answers. It is the prideful executive, perched on the precipice of failure, who is unwilling to hear new ideas

So leaders should create opportunities to listen to their teams. A servant leader makes clear their intent to listen to new ideas, encourage the development of others’ ideas and set clear expectations for execution of the best plans.

As for the vulnerable aspect of needful, this is apparent in the leader’s desire for input from others and feed forward. If the message from the leader reflects that they do not have all the answers and even made some bad decisions in their past, that leader reflects vulnerability. Furthermore, this behavior encourages action from the team. For, if they know their leader to be human, they see the need for support and the role they play in providing that support.

Among my favorite lessons from Robert Greenleaf is the one on “Primus Inter Pares”. This is Latin for, “First Among Equals“. The point is, if someone is an expert on  a topic, they may be better to lead a discussion or decision on that topic, than the chief executive. Servant leaders recognize they are not the best to lead in every situation. Max De Pree wrote about this in Leadership is an Art:

So leaders should be clear who is first among their equals. And remember, their equals do not require a fancy title to be considered.

What NEEDFUL is Not

A needful leader is not one who follows every recommendation. That would be foolish. Remember, another key attribute of servant leaders is resolve. So a leader who switches directions frequently or lacks a clear vision is not serving their stakeholders and will lose the momentum of the team. In seeking new ideas from others, the leader must carefully consider the recommendations and delegate the research needed to consider all implications of an idea. This is about being thorough – the last of the principles in the SERVANT-Leadership™ acronym.

Furthermore, the servant leader is no wimp. Being vulnerable does not necessitate a blubbering mess, unable to control their fears. I often cite military leaders as some of the best examples of SERVANT-Leadership™ in action. They’re no wimps.

Vulnerability does not require weakness. Instead, it means being receptive to the idea of help from others. “United we stand, divided we fall”. A servant leader appreciates that when it comes to the whole of a team:

The whole is greater than the sum of its parts -Aristotle

Previous servant leadership models defined many needful attributes as important to servant leaders. These include the following from Spears and others, Frick & Sipe as well as Russell & Stone (2002).

Darwin Smith: CEO and Chairman of the Board of Kimberly-Clark from 1971 to 1991, Smith was an unassuming man. Yet he led an amazing turnaround at the then paper-giant to a leading consumer-goods company. Darwin was needful in seeking ideas and advice from others. When it came to praise from others, he explained the real praise goes to the teams he led. In fact, the man never felt qualified for the job. The following is from Jim Collins and the book Good to Great:

“Early in Smith’s tenure as CEO, a director pulled Smith aside to remind him that he lacked some of the qualifications for the position (he had been corporate counsel and had never run a major division). Smith, a man who never entirely erased his own self-doubts, later summed up his tenure by saying simply, “I never stopped trying to become qualified for the job.”

John Letts: You may not know John, but he was a senior leader at my employer, early in my career. In fact, I was less than a year out of college when I had a general check-in with him. He was several levels above me, so I considered this meeting a kind gesture by him and an opportunity for me. On one day, during our scheduled check-in, there was an escalating crisis in his department. I anticipated our meeting would be cancelled. However, as I approached his office, his assistant said we were still on. I asked John, “wasn’t he busy?” and “should we reschedule?”. No, he assured me, his team was on top of it and he’d been looking forward to our meeting. He delegated and trusted his team while simultaneously displaying his need to hear new ideas, regardless of the source. John is an excellent servant leader who reflected the needful concept, beautifully.
Question: Which aspects of a needful servant leader do you believe are most important?
Special Thanks: I struggled to find the right word for this aspect of the SERVANT-Leadership™ acronym. But my friend, colleague and fellow servant leadership advocate, Mike Brunsting, hit the nail on the head when he suggested, “Needful”. Thanks, Mike!
References:
1. Spears, Larry: Power of Servant Leaders (Greenleaf, Spears, 1998); Servant Leadership: A Journey into… (Greenleaf, Spears, 2002); and more
2. Sipe, James W. & Frick, Don M.: Seven Pillars of Servant Leadership: Practicing… (2009)
3. Russell, Robert F. & Stone, Gregory A.: A Review of Servant Leadership Attributes: Developing… (Leadership and Organization Development Journal, 2002)
BLichtenwalner2020-03-03T17:47:33-05:00November 17th, 2014|Servant Leadership|0 Comments