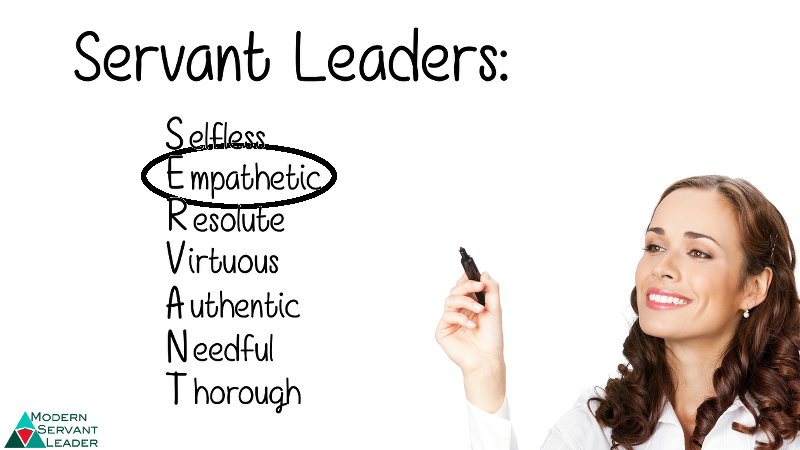 The second principle in the SERVANT-Leadership™ acronym is Empathetic. In order to lead people, you need to know what it feels like to walk a mile in their shoes. Even if you’ve never been in their position, you must have the empathy to perceive their circumstances, from their point of view.

Dale Carnegie, in his classic book, “How to Win Friends and Influence People” explains the importance of empathy. When empathizing with a person, Carnegie says, you should always tell them that if you were in their shoes, you would feel the same way. Which true, of course. If you were born where they were born, grew up in the same family, experienced all the same matters, you would be that person. Therefore, you would feel the same. This simple recognition has the power to diffuse many difficult situations. But it must be genuine.

The ability for a leader to genuinely empathize enables them to relate to those they lead. Through active listening, the leader is able to hear the challenges of stakeholders. Then, that leader can relay their understanding to those they serve. Stakeholders who believe the leader understands their challenges will endorse that leader and invest in their mission. In fact, this is often the difference between employees who work for money and those who work for a mission – whether or not the leader is empathetic.

What Empathetic is Not

Empathy is not a weakness. To the contrary, empathetic leaders often spend a great deal of time hearing about the pain and suffering of constituents. To do so and remain positive and optimistic requires a great deal of fortitude.

Empathy also is not caving into every concern or fear of those you serve. Leaders must maintain their resolve and cannot waffle on many decisions. Otherwise, the followers will lose confidence and be uncertain of the direction a leader will take.

Previous servant leadership models defined many empathetic attributes as important to servant leaders. These include the following from Spears and others1, Frick & Sipe2 as well as Russell & Stone3 (2002).

Many examples exist of empathetic servant leaders. Here are a couple:

Herb Kelleher: Herb Kelleher, the charismatic co-founder and long-time CEO of Southwest Airlines was known to show a great deal of empathy throughout his leadership at the company. In fact, thanks to his leadership principles, Southwest Airlines remains among the greatest examples of SERVANT-Leadership™ businesses today. Perhaps the greatest example of his empathy was displayed when we would spend Thanksgiving day helping baggage handlers load planes so they could get home sooner to their own families.

Question: Which attribute of empathetic servant leaders do you think is most important?