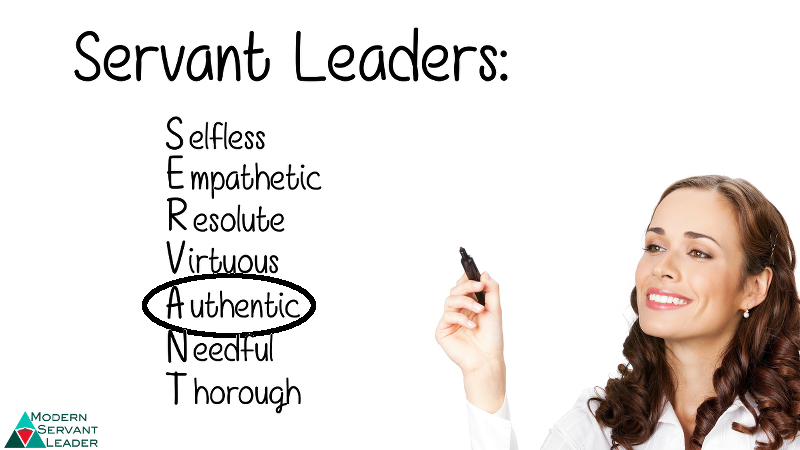 The next principle in the SERVANT-Leadership™ acronym is Authentic. Authenticity is all about transparency. A great leader is the same in private as they are in public. What they speak behind closed doors matches what they say on stage. The authentic servant leader is consistent in message and transparent in intent.

There is no gossip. Speaking about someone should include only a message you would say to them directly. Often, it is a strong message from the servant leader that makes it clear gossip and it’s cousin – dirty politics, are forbidden in their organization.

Authenticity is revealed by leaders who say what they can, when they can say it. A leader is often placed in a position of confidential information. Examples may include pending investments, divestitures, hiring or outsourcing decisions. When dealing with sensitive matters, the servant leader often says, “Here’s what I can share…”. Then she may go on to say, “I can not share information related to the following topics… because…”. The point is, stakeholders of the leader understand the need for confidential information from time to time. However, they must be able to count on the leader to share as much as possible as soon as possible, This is authenticity through transparency.

What Authentic is Not

Authenticity does not require wearing your heart on your sleeve, but some may. The authentic leader must remain strong in times of trouble, but it does not mean they cannot share their fears. This authenticity is also no excuse for a lack of knowledge. It may be an explanation for that lack of knowledge, but the leader must resolve to get answers quickly and follow through with resolve.

Perhaps most important, authenticity is never a false front. The leader who pretends to be something they are not will lose their following when revealed. Authenticity is not a sign of weakness. Quite the opposite – authenticity requires the strength and confidence to be vulnerable. Therefore, authenticity will not turn away authentic followers, only the disingenuous.

Previous servant leadership models defined many authentic attributes as important to servant leaders. These include the following from Spears and others1, Frick & Sipe2 as well as Russell & Stone (2002)3.

Michael Hyatt: When Michael Hyatt was the CEO of Christian publisher, Thomas Nelson, he was also among the most popular bloggers and social media pundits. Online, Hyatt’s followers gleamed insight into both his personal and professional life. While leading a faith-based, for-profit company, it is important to be transparent. His transparency revealed that his family life was not perfect, but it was faith-based. He was the same man inside the office and out.

Rand Fishkin: Mr. Fishkin is the co-founder of Moz, the inbound marketing software company and Inbound.org, a community forum for inbound marketers. You don’t need to understand what he does to appreciate what he did. As the self-title “Wizard of Moz”, Rand put their philosophy of transparency into action. He put his performance review online for all to see. In it, you see he was fairly critical of himself and as candid as one may expect. The next time you struggle with how to lead by example, in the principle of authenticity, consider sharing your own performance review.

Question: Which attribute of authenticity do you believe is most important for servant leaders?