Below is a new, recently discovered letter from the infamous Screwtape demon. If you’re unfamiliar with Screwtape, read the background at the end of this post. 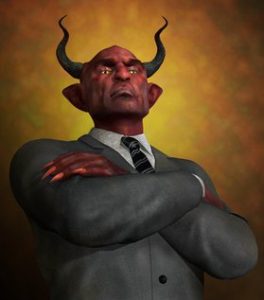 It displeases me that I must continually educate you on the most basic principles of conversion. Your last letter suggested uneasiness at learning that your patient had recently been promoted to a managerial position by his employer. Why does this disappoint you? Haven’t you learned that a recently promoted manager is most susceptible to many advances? In his eagerness to flaunt his achievements you should most easily identify tactics with which to convert this despicable Christian to our Father below.

A human patient that sought praise and attention from peers relishes little more than a promotion to a role in which he now manages those peers. He feels powerful, important and controlling. He now sees himself as superior to those former peers. These vices and the vanity which accompanies them fogs the patient’s vision. This fog makes it all the more difficult for our enemy to have influence with the patient.

So your time is at hand. You must strike while the iron is hot, before other Christians get to your patient with cautions of these vanities and educate him with readings from that cursed book of our enemy.

Here are come common tactics that other Tempters found effective when dealing with patients newly promoted to their first, so-called, “leadership” role:

Prey on Ego: We’ve often leveraged the ego of your patient for our benefit and this is no time for deviation from that strategy. Fill his head with thoughts of superiority. When he passes that young lady in the hall he finds attractive, inject the thoughts, “I am now her superior”. Let his lust carry it from there. Encourage him to flaunt the new title and urge Tentator, the Tempter in charge of your patient’s new supervisor, to send your patient his new business cards, with the new title, at once.

Smother with Symbols of Authority: Now that he has a specially designated parking space, reinforce his need to purchase a luxurious car to display (see debts below). Have vendors seduce him with expensive dinners and entertainment. Then urge your patient to accept these gifts by viewing them as mere business meetings. I understand he will also have a new secretary to assist him – you must try to identify one already converted to our Father below. For the secretary wields great influence on a patient in a human leadership role.

Grant Easy Victories: To reaffirm his false sense of importance and vanity, grant him easy victories and business success. Flattery from his colleagues on the ease with which he fulfills the new role will serve to build his walls against our enemy.

Entrap in Debts: Your cousin, Fatuus, lost his patient when the enemy persuaded that patient to take a lower paying position that served poor and helpless humans. Avoid this pitfall by making your patient dependent upon the higher salary accompanying his role. Entice him into homes more expensive than he should afford and show him favor with expensive worldly trinkets.

Smother with Praise: The vanity of your patient is among your greatest weapons. Ensure his boss and those he deems “superior” regularly praise his accomplishments. It doesn’t matter that these so-called accomplishments are meaningless. All that is important is that he thinks they are valuable and are recognized as such by other mortals.

Whisper “You Deserve It” Often: Whenever you think the enemy near, block their influence by whispering, “go ahead, you deserve this” or “you’ve earned it”. This works especially well when the enemy uses an attack of humility or concern for others.

Wormwood, I say again, the promotion of any patient to a new managerial role among mortals is always a great opportunity for us. When next you write, tell me how you’ve leveraged these tips to convert the Christian to our Father below.

Background for those unfamiliar with The Screwtape Letters:

In The Screwtape Letters, author C.S. Lewis wrote a series of letters in the first-person, from a Demonic mentor (Screwtape) to his “Junior Tempter” nephew, Wormwood. Wormwood is tasked with achieving the eternal damnation of his “Patient” to their “Father below” (Satan). The letter above is a fictitious letter, written as though it were part of that collection of letters. This “newly discovered” letter focuses on how a tempter might gain the upper hand of a “Patient” who was recently promoted to a managerial role.

The preceding is an interpretive addition to the work by C.S. Lewis, meant in pure gratitude and appreciation for the original work. It is not, in any way sanctioned, endorsed, supported or otherwise associated with C.S. Lewis, The Screwtape Letters or its publishers. If you are not familiar with the book, I strongly urge you purchase a copy.