Servant Leaders And Our Nation’s Independence 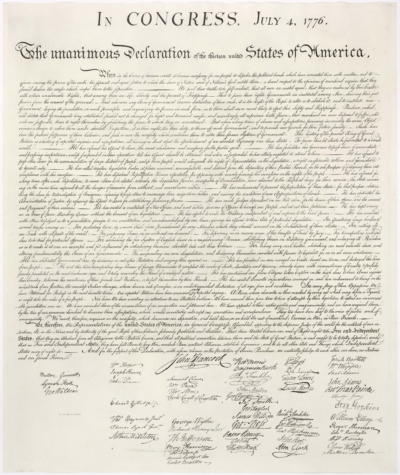 The Declaration of Independence

The Fourth of July in the United States of America is celebrated as the nation’s birthday – our Independence Day.  It was on the 4th of July, 1776 that the Continental Congress adopted our Declaration of Independence from Great Britain. The creation of this document, the adoption of it’s authority by our congress and the freedom of our nation that it represented would not have been possible without the great service of many leaders in our young nation’s history. Created, read and adopted in Philadelphia, the document set forth many servant leadership ideals. Included among these statements is one of the most famous in the English language, which would eventually be used by Abraham Lincoln in the emancipation of slaves and the creation of Emancipation Proclamation:

We hold these truths to be self-evident, that all men are created equal, that they are endowed by their Creator with certain unalienable Rights, that among these are Life, Liberty and the pursuit of Happiness.

Although most of the original text is attributed to Thomas Jefferson, every American associated with this document’s creation and adoption displayed great service to their fellow American. For every man that signed the document understood fully the risk they accepted willingly – the risk of execution by Great Britain for treason to the founding country. Beyond this great personal risk, each man supporting the document and its aims also risked their livelihood and even their family’s well being. As a result, it is clear these individuals were all willing to invest great personal risk in their devotion to serving the constituents of these United States of America.

Therefore, whether on the 4th of July or anytime throughout the year, we should remember the debt of gratitude we owe to these great servant leaders and founding fathers of our nation.

The servant leaders that signed of the Declaration of Independence included: