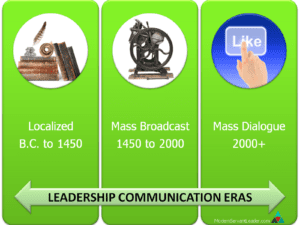 Before the printing press, leadership was personal, but suffered the constraint of scale. Military power was the only way to achieve large capacity. That form of leadership was localized. It was about power and control.

The printing press arrived and enabled mass broadcasting. Finally, the masses could read the words of their leader directly. Still, the communication was one way. Leaders depended on others to interpret and relay communication back from the masses. The people had no way of communicating directly back to the leader. The dominant form of leadership remained power and control.

Enter social media and the era of mass dialogue in leadership. Now, the masses finally have a way to get their  message heard directly, back to the leader. The message is heard, for it can not be denied. Now, the dominant form of leadership is about service.

It’s simple really. Leaders and followers can now conduct a mass dialogue for the first time in history. Here’s how it works:

1. The leader makes a decision or takes an action
2. The masses react – in many different ways
3. Reactions are captured across many social platforms (Facebook, LinkedIn, Twitter, Blogs and more)
4. The most popular reactions – both for and against, rise to the top through votes, shares, likes, +1’s etc.
5. The leader can not deny the most obvious feedback

To be certain, the leader still decides how to react to the feedback – if at all. In fact, some of the best leaders must not adopt the strongest feedback. Leadership means making tough calls that are unpopular at times. Regardless, the leader can no longer deny awareness of the feedback.

This is why dictatorial nations, like China, Cuba, Iran and North Korea block or heavily censor the Internet and therefore social media usage. These leaders persist in part due to their ability to control the masses and prevent popular sentiment uprising.

You now have a choice: participate in the mass dialogue or ignore it. One is the path of democracy. The other, dictatorship.