There are leadership lessons in Southwest Airline’s fall from grace. The company has been a servant-leadership darling since it’s inception and co-founder Herb Kelleher applied the principles for decades before stepping down as CEO in 2001. Often, following transitions in leadership, the principles of the predecessor are abandoned. However, internal successors were found and they retained servant-leadership principles for many years. So what went wrong and what can leaders learn from the example?

The holiday winter weather of 2022 caused problems for every major US carrier. However, several factors contributed to a much larger problem for Southwest.

Southwest’s Response to the COVID Pandemic

Until the COVID pandemic, Southwest Airlines was the only major, global airline to post a profit every year. In their attempt to remain the most profitable airline, the company substantially reduced spending on major investments. It also asked employees to take pay cuts in lieu of layoffs. As a result, it was among the airlines that faired best, financially, as we slowly emerged from the worst of the COVID-19 pandemic, but badly needed investments were postponed.

Yes, a massive winter storm was especially bad for the company. Two of Southwest’s major hubs (Chicago and Denver) were hit especially hard by the winter holiday storm of 2022.

All airlines overbook their flights. This is especially true during high traffic times like the holiday season. Still, this was a contributing factor to Southwest’s fall and worth noting, when much of the airline’s success came from bucking common industry trends. Their decision to not buck this trend, combined with the misfortune of having two of their hubs hit by bad weather simultaneously, exponentially increased their rescheduling demands.

This was the main root of their problem. While other major US airlines recovered within a couple days, Southwest Airlines fumbled the ball. Why? Because Southwest Airlines seems to have the worst, most outdated operating technology in the industry. According to FlightAware, all other airlines recovered from the storms. In contrast, Southwest still had 2,500 flights cancelled on a day when the next largest airline cancellations were from SkyWest at 77. The reason for this vast difference in recovery? Failing technology. Company COO, Andrew Watterson, explained their scheduling software could not match available crews with planes quickly enough. Meanwhile the flight attendant union president explained the phone systems also could not handle the load. A company of Southwest’s scale does not get this far behind in technology without repeatedly ignoring the advice of their IT department.

Even organizations with strong fundamental principles and great culture can falter when their focus is too narrow on any particular metric. In servant-leadership terms, this is a failure of the principle, THOROUGHNESS. Leaders are thorough when they take a comprehensive focus of their business. To be thorough means putting long-term results ahead of short-term gains. In their case, the desire to remain profitable every year was a short-term gain leadership chose over the long-term benefits of upgrading their technology. There are several leadership lessons from this sequence of bad decisions.

Too often, information technology and operational tools are minimized as costs to be controlled. Yet, time and again we see how IT system failures cause major problems for companies. Simply put, any IT professional can tell you, Southwest technology leaders have likely requested an upgrade to their systems for years. Thorough leaders would see their systems as terribly antiquated compared to industry standards. IT systems and departments create value for your organization. They enable and empower employees. When you minimize them as costs to control, you strip your people of their powers and flexibility.

If you screw up, own it. Accept where you went wrong immediately. A handful of high level messages, admitting wrongdoing and apologizing, as Southwest has done, helps. Yet that’s not enough. In times of crisis, great leaders are prominent in their apologies and prolific in the media. Right now, everyone wants to hear from Southwest executives, but most media sources quote a handful of messages or secretly obtained internal communications. Leaders with great teams in place to manage the crisis internally, should be on a media blitz tour, accepting responsibility and continuously communicating their plans and progress to fixing the situation.

I’m part of this problem, myself. Those of us who raise Southwest as a model of servant-leadership were proud of their incredible profits. How the company bucked the industry in even the darkest of downturns made their example even more enticing. Yet, what was the cost of this incredible trend of profitability? Clearly, excessive cost control at the risk of the companies operational foundation played a role. There is a time to take the costs and invest in core systems that may hurt bottom line results.

When the shit hits the fan – especially when we threw it – great leadership demands we overcompensate. Southwest knows they screwed up. They’re trying to fix it. What they’re not doing is overcompensating their customers. Look at the Tylenol cyanide poisoning crisis for an example here. Johnson & Johnson responded not by worrying about the costs to the bottom line, but by taking the best possible actions for their customers. Preliminary findings suggested the incident was limited to the Chicago area. Costs could easily have been controlled by focusing on that geography. Instead, Johnson & Johnson immediately pulled all Tylenol off the shelves, everywhere. They ceased all advertising. They offered law enforcement their full and immediate support. This overcompensation costed Johnson & Johnson $100 Million. It did not matter to their executives. It was the right thing to do. Faith in Johnson & Johnson was restored as a result of their overcompensation. Southwest Airlines, for example, could be investing not just in buses for stranded passengers, but in limousines and town cars. They could not just be putting customers up in hotels, but in Bed and Breakfasts and 5 star resorts. When we screw up and we know it, we need to overcompensate to right the wrong.

Trust is damaged. Regaining that trust is extremely difficult. One way to help regain the trust is to brand your changes. Returning to the Tylenol example, it became public knowledge that Johnson & Johnson would respond by sealing their bottles, placing cotton balls inside and implementing other safety features. In the same manner, I hope Southwest brands their changes with constructive marketing to regain the public trust in their ability to deliver reliable service.

Southwest Airlines set the standard for leadership in the airline industry for decades. We now know there was a cost to that level of success. How they respond from here will determine whether it is a bump in the road or the beginning of the end for their leadership example. To avoid a similar fall from grace for your organization, make sure you are thorough with your leadership. 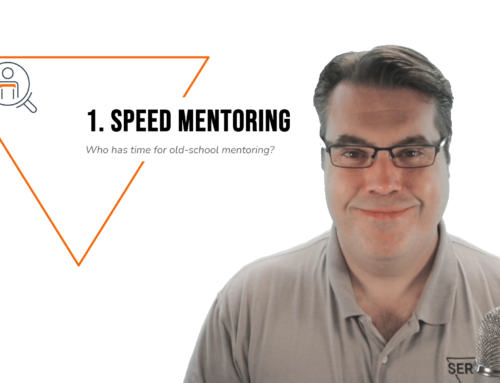 What is Speed Mentoring? Gallery

What is Speed Mentoring?