Are You Creating Enemies or Traitors? 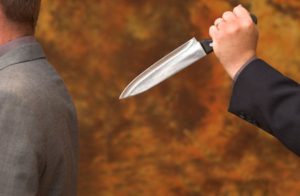 The bad guy is whatever you fight. In for-profit companies, this should be your toughest competitor. In a non-profit, the enemy should be the injustice you seek to eliminate: hunger, poverty or disease. In religion, your enemy is obvious: Satan. The problem is, when you don’t constantly point out these bad guys as public enemy #1, your team will create villains within the team: these are your traitors.

Your team needs a villain to attack. Therefore, without an enemy for your team to align against, they will look among themselves for that villain. Instead of innovating solutions to defeat the external competition, they’ll focus on internal competition for that next promotion. The result? You have traitors wasting time, money and energy inside the organization.

Creating Enemies for Your Team

Creating enemies for your team is easy. They already exist, you just need to point them out. Here are some tips for creating enemies instead of traitors:

1. Reveal Them: Reveal the unethical business practices of competitors. Display the destructive results of an injustice.
2. Name Them: Don’t be afraid to name your enemies. People want passionate leaders.
3. Sitrep: A Sitrep is short for Situation Report – a status update on a critical area or battle. Provide frequent and regular sitreps to your team. Who is winning the battle? Who is winning the war?
4. Call Out Traitors: Have a no tolerance rule for traitors. Reiterate that dirty politics or attacks on team members will not be tolerated.

As a leader, you are either pointing out the enemies or enabling traitorous behavior. Keep your team looking outside the company for their bad guys and you’ll have a more effective, engaging and happy team.

Questions: What other ways can we focus on bad guys and avoid traitors? Leave a comment here.