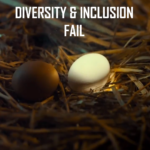 Welcome to 2020. Please don’t expect major corporations to grasp the concept of true diversity, unless you help. We see another example today, presented by Comcast’s subsidiary, NBC Universal, while launching the new streaming service, Peacock.

To raise awareness and anticipation about the upcoming launch, NBC Universal created a series of commercials with eggs about to hatch. One commercial, advertised during an NFL playoff game last night, showed two eggs in a nest. One egg is brown. The other egg is white. A spotlight shines only on the white egg, as the following message is displayed:

This little guy is gonna be a star…

The brown egg remains in the dark.

The service is named after a bird known for it’s beautiful diversity of colors, the peacock, NBC’s logo. Throughout history, white colored and dark colored items have been used to identify with white-skinned persons and minorities, especially African-Americans, respectively. This video highlights the white egg, while leaving the dark egg in the shadows and speaks of something exciting. Anyone with an attention on diversity or prioritizing the prospective concerns of minorities would see this ad as offensive to many. As one Twitter comment reads: 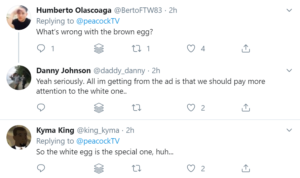 Within 2 hours of the same video being posted to Twitter, 7 of the 16 comments reflected concerns the imagery seemed racist.

Where Comcast Failed on Diversity

I doubt Comcast or NBC Universal intended to demonstrate racism. What they did demonstrate was a lack of sensitivity to racism among their workforce, programming and community impact. The Comcast NBC Universal website has a Diversity & Inclusion page that says:

…We believe that a diverse and inclusive company is a more innovative and successful company, which is why we aim to infuse diversity and inclusion (D&I) into all aspects of our culture and our business. For us, D&I is not a program — it is a central element of our credo and our DNA. Our approach to D&I is focused on five key pillars: Governance, Workforce, Supplier Diversity, Programming, and Community Impact.

This statement almost sounds nice. It is unfortunate they felt it necessary to highlight that diversity and inclusion is good for business. Still the rest of the statement sounds good. In fact, it emphasizes some aspects of what diversity should look like in a corporation.

If Comcast had been practicing what they proclaim on their website about Diversity and Inclusion, they would have delivered the following in each pillar they claim:

Governance: Before launching the first advertisements for a new division, governance would include vetting by a group of experts. These experts would include diversity-focused roles and responsibilities.

Workforce: A truly diverse organization includes a diversity of employees throughout the organization. These individuals would feel safe to raise concerns with messaging like the one displayed in this ad – intentional or perceived.

Supplier Diversity: In large organizations, marketing services are often provided by third parties. If this was the case, that provider likely lacked it’s own diversity of workforce or governance.

Programming: If NBC Universal cannot identify and prevent diversity failures in their own marketing, viewers will infer little trust in their ability to do so with programming.

Community Impact: Messages like these are harmful to minority communities. We know better, but repeated offenses of similar messages hurt those they reach over time.

What is True Diversity in Leadership

Real diversity is not only a program or even an initiative. When leadership is dedicated to diversity and inclusion, it is not limited to, but will definitely include the following:

Diversity Tips for the Leader

If your organization may lack the diversity and inclusion it needs, start with your inputs. Look at what you read, listen to, or otherwise consume. If they are not created or delivered by those who look, speak or act different than you, adjust your inputs.

As a leader, your team will follow your lead. As you consume more diverse and inclusive content, share it with your team. They will get the message.

Formal programs for diversity and inclusion can be a start. However, as Comcast demonstrated yet again, still in 2020, they don’t solve the problem. Start with yourself and focus on truly diversifying and making your organization more inclusive.