Leadership Lessons From My Accident 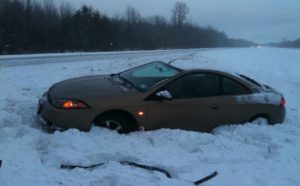 Going Into A Snowbank Can Teach You A Lesson

At 7:15 AM, I was already well on my way down the hour-long commute.  On that morning I drove “the wife’s car”, because my regular vehicle was in the shop.  It was a classic Midwest winter day, with plenty of lake effect snow, but the region was prepared for the conditions.  As such, the roads were fairly clear. Still, occasional sections looked suspiciously like ice.  As a result, I drove under the speed limit, but still passed a few people who “probably shouldn’t be on the road anyway”.

It was during one of those passes that I felt the back end start to slide out.  After several counter-steering attempts, the fishtailing continued and I realized there was no escaping it.  The car crossed from one shoulder to the other, traversing two lanes and back, before crashing into the median.  Thankfully, with the exception of my ego, there was virtually no damage.

I counted my blessings and pulled up the maps on my iPhone.  The GPS located me precisely.  I called AAA, which had me back on the road in an hour.  A quick inspection by my regular mechanic and I was still in the office by noon.

Making the best of an unfortunate situation, I realized there were several leadership lessons in this experience that were worth sharing:

1. Observe Warning Signs – Remember those people that “probably shouldn’t be on the road”?  Their caution was a warning sign.  They had experiences (or lack thereof) which caused them concern.  Don’t ignore the warning signs in your organization.  Nay sayers may not just be pessimists.

2. Manage Change – I drove a less familiar vehicle.  This should have created more caution, especially in poor weather. When have you treated a new environment in business as “the same old situation”?

3. Balance Risk / Reward – As discussed in Project Tailgaters and Brake Checkers, it’s important to understand the risks and rewards or cost / benefit of each decision.  Here, by passing other cars, I could arrive 15 minutes earlier.  I assessed the road and it seemed clear and safe, but was it worth the risk?

4. Monitor Progress – As I sat in the ditch, covered in snow, I had only a vague idea of my location and was not certain how to guide someone to me for the tow.  If your project goes awry, will you know the quickest route to recovery?

6. Have the Right Team – With a AAA membership, the right people were just a phone call away. I also had a trusted mechanic who fit me into his schedule quickly and provided an assessment I trusted. When you get into trouble at the office, do you have a team to do the same?

7. Learn From Mistakes – Hence this post.  If I end up in a ditch again, after sliding on ice, hopefully I can say I learned from these mistakes and it was something new, that caused the crash this time. Will you learn from mistakes at work?

Question: Now the fun part.  After looking at all the things I did wrong, what other lessons can you take away from my mistakes?  Go easy on my ego though, please.  I’m already doomed to months of jokes at the office for my failure to stay on the road.[/fusion_builder_column][/fusion_builder_row][/fusion_builder_container]